Design, prototype, test.
All in one tool.

Validate your ideas early and see them work on the real device. 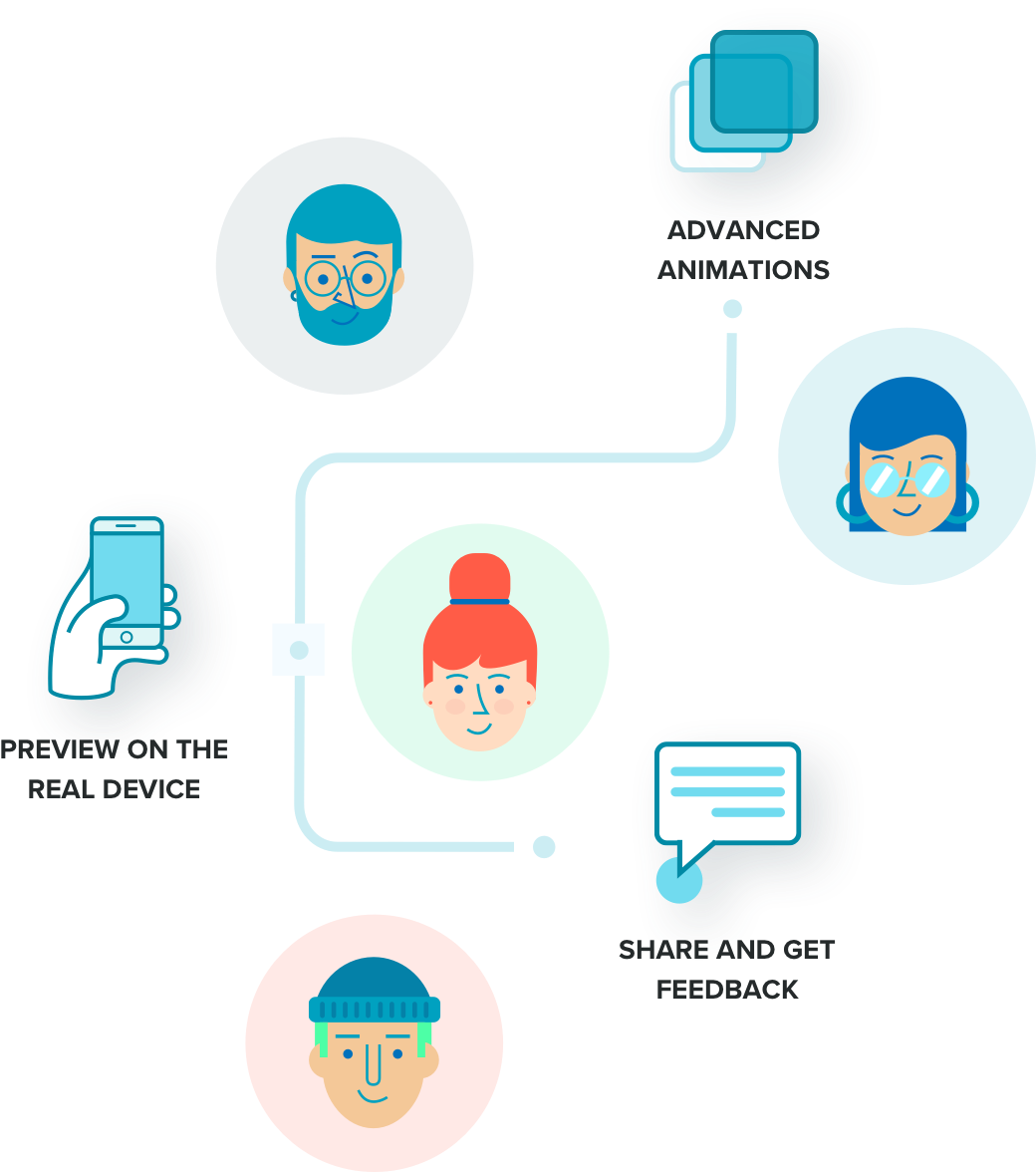 Trusted by companies of all sizes and passionate individuals

Thousands of companies trust Proto.io for their prototyping needs

"It helps us to develop a realistic prototype with complex features quickly. This leads to a very powerful demo for client buy-in of the design."

"Proto.io helps us communicate complex interaction patterns in an iterative and rapid design process. The gestures and logic depth allow for us to get creative and pull off some really amazing and robust prototypes."

"Proto.io is our tool of choice for prototyping mobile interactions in the concept phase. I found the custom transitions especially helpful in articulating the vision of the app to both customers and stakeholders."

"Proto.io lets my team create near-native experiences for user research and stakeholder presentations. This makes it very easy for us to communicate ideas effectively and get quick buy-in on new features."

"Proto.io has some of the best interaction abilities out there. It's ideal for touch based prototypes and has a large range of transitions and animations. For me, it's far better than say Axure for mobile and tablet based prototypes."

"Proto.io allows us to quickly build and test new interfaces that behave like the real thing. Being able to go from idea to high-fidelity experience in a couple of hours is huge. Nothing comes close."

"Proto.io is one of the best tools for mobile device prototyping. It is faster and more efficient than a lot of the other tools available."

"I find Proto.io incredibly useful because it's very easy to prototype at varying levels of fidelity across multiple devices. The other massive advantage is that the Proto.io toolkit allows me to easily and quickly mock up something new, including the addition of multiple types of interaction, so the flow and feel is never lost. Gone forever are the days of static Photoshop wireframes!"

"Proto.io is more than just silly-fast mobile prototyping - it is super-effective product designing. Nothing beats team members, users and clients evaluating a flow or mobile design on the device. Proto.io delivers the fantastic blend of high-fidelity and native feel without actual coding (or burden on your engineering team). Usability testing, stakeholder reviews and morning stand-ups will not be the same - they may believe it is already live."

"As a designer Proto.io enables me to test ideas quickly and come up with new ideas. To me that's an essential part of the design process. It also helps me create high fidelity prototypes with rich interactions in no time. Great for showcasing concepts and communicating the design to development"

"Working with Proto.io helps me communicate ideas with product managers, other designers and developers. Proto.io let's me iterate quickly on designs without having to spend extra time adding or subtracting code from prototypes."

"Proto.io is the best in-browser design environment for prototyping. Its focus on allowing us to create high-fidelity interactions, playfulness, and fluidity is what clients demand from a prototype these days."

"When we implement new mobile products, Proto.io helps communicate the idea effectively to the entire team of designers, developers and management so that everyone is on the same page and we can execute quickly."

"We found Proto.io so useful and powerful that we built our startup around it. We now use Proto.io exclusively to prototype realistic apps for our clients!"

"Startups often fail to convey ideas effectively when they're just starting out. Proto.io helped us communicate our product vision to customers, investors and developers, and was critical in getting us off the ground while we were in our earliest stages."

"Proto.io is one of the best tools available to make prototypes come to life. It's extremely easy to use and it comes super handy to quickly explain interactions, gestures and layout to both peers and clients."

"We use proto.io to quickly put together low and high fidelity prototypes, used for demoing and user testing. Simply a great tool that helps us in our daily work."